Administrator
This thread will address concerns and questions I've been reading across the forum, concerning the next upgrade.

Index:
posts 1 - 4 How a new tool, 'groups', will help replace some functionality we'll lose when we lost private messaging.

post 5 Ideas for how to save the text of private convos that you'd like to keep.
Last edited: Mar 10, 2018
Need help using the site? Contact Us.

Administrator
About Private Conversations going away...

Why are private conversations being removed?
Over the last year, there has been a steady increase in the number of problems generated over PC, or because of PCs. We've had grooming activity, fund solicitation, dating-site type behavior, and personal attacks. These problems are sourcing from new and established members, alike.

We've always been clear that Admin has the ability to read PCs, but that we don't read them without cause. That's the truth - but, with more problems, comes more call for oversight. And that has left us in this strange zone where PCs are sort-of-private, but sort-of-not...which doesn't really help anybody in a forum population largely struggling with hypervigilance and anxiety issues.

This is a forum. It exists to foster peer support. We do understand the value in small-group discussions, and do not intend to lose that aspect of what PCs currently offer.

How will the forum support small-group conversations?
In place of PCs, there will be a private group function. A forum member can use private groups to set up any kind of side-conversation. It might be for a special topic, or for more targeted support. It could be anchored in PTSD issues, or religion, or politics, or mindfulness exercises, or other diagnoses/health concerns. Private groups will be the place where like-minded individuals can discuss whatever they'd like. In order to set up a private group, a member will make a request, and Admin/staff will set it up.

Private groups will not be entirely 'private'. They will be passively supervised.

What does that mean?
The member starting the group will suggest an appropriate staff member(s) who would be a good fit. That staff member will join the group, participate if they want, and keep an eye on things. There will be little to no need for active moderation, since the group should be made up of like-minded members, and those who don't like the conversation can just leave - same as they do now in group PCs. Anything that staff aren't appropriate for, Admin will supervise.

When does this happen?
When we make the transition over to no-PCs, we'll implement private groups. There will be some trial and error in working out the best ways to use them - but I'm confident that the private groups will preserve what is beneficial about PCs now, eliminate the ways they can be abused, and provide clarity around oversight.

Bottom line:
If you currently participate in a topical or specific-support based PC group, you'll be able to continue that conversation in private groups. You'll need to bring a staff member on board, if you don't currently have one.

We will have an open thread for questions when we are closer to the change-over. Until then, you can ask questions via help-ticket; I'll either answer them, or capture the question to address on the open thread at a later date.
Need help using the site? Contact Us.

Founder
Faster to add this: Minor Caveat to Above

A group owner will always be an admin. Users, including mods, can be added as group moderators that allow specific individual group management needs.
Need help using the site? Contact Us.

A group can only EVER be created, edited or deleted by a site administrator, of which there are only three at MyPTSD. Why? Because groups are entirely separate for access permissions in relation to forums. In other words, the owner of a group can control all members access to that group (except mine). This is not to say we won't assign group ownership to members, because we will, as we do not want the annoyance of managing each group. What will happen is that we will add all / relevant staff for oversight, and if an owner (trusted member) removes any of them, I will remove that user from groups, permanently. Only members we deem as trusted will be given such group control, as we can assign members to group moderator positions, of which they can control their group and moderate content and access that way, in a restricted capacity, without the need to own the group itself.

A group can be:
A special group will exist outside of the above, being the private supporters. This already exists, but will be moved into groups. It will be the only private group which is invite only and contain a forum. This makes management easier for our supporter moderator, as they will no longer require admin intervention to add a user to the group. Private supporter staff will own the group. They then manage invites as a result for that special group. Forget about this in the context of this post and groups, as this is a special group, and the only invite only group.

Depending upon the subject to be discussed, @joeylittle will decide whether a group is to be public or member only content (search engine accessible or not). Our focus is whether the content is found via search engine, as some content is good to help our growth, other content is not ideal to be found publicly. We can share group discussions publicly, whilst making group photos member only, for example. This allows members to upload personal photos without them being found elsewhere online due to search engines.

Only a MyPTSD admin as a member of a group can modify a groups key settings (except myself).

Groups bring a different element to the site. They will evolve like all things. The idea is to restrict the online issues on topical niche discussions, related or not to PTSD, and place them aside where groups of like minded individuals are free to discuss their niche, limiting trolling and other such behaviour from guests or members. Groups allow us to restrict with ease to cause less conflict to like minded persons. For example:

if Christians wanted their own group to discuss their religion, then we can create a group for them requiring approval to join, where they manage who is part of their group -- which ensures that only those with Christian values are part of the group, removing comments by those of other denomitations who agree or disagree with the groups values.

There will be times where we feel existing forums and threads are a better course for a topic, thus rejecting a submission for a new group to be created. It will help focus many of the social threads into a group setting, where you can have multiple discussions, not just a single long thread, where you can have a photo album aside from the discussions to share artwork, for example, in an art group.

Group creation and structue will be a discussion with the person who wants the group, and wants to manage it. There will be things we may override from suggestions because we deem necessary from an administrative view.

Guns and the right to own them have nothing to do with PTSD. Shooting someone is different than owning them. So we may have a member only gun control group, where any member can go and debate about guns, yet that content is not going to be found in Google from a PTSD website.

To go a step further, there may be members who are pro gun and want a pro gun only group to talk guns, share their photos and so forth. So we may create an approval member only group, where you verify on an applicants profile in pre-discussion that they are pro gun and want to be part of the group for the right purpose. If so, approve them. If not, don't.

Obviously anyone who lies to join a group will simply be banned from groups, zero access. See how this starts to remove issues in discussion? We can significantly restrict and categorise people to discuss freely their niche topics, without some of the issues that are apparent in threaded discussion or by giving thread creators the ability to thread ban -- which people abuse and thread ban members just for disagreeing with them or such.
Need help using the site? Contact Us.

Administrator
Topic: How do I save the PM's I want to keep?

Here are some suggestions, ranging from simpler but time consuming, to faster and more complex. None of these suggestions require any additional software. If you have access to graphic editing software, you'll likely already know how to utilize that tool to capture and save large blocks of webpage content.

1. Print them. If you have access to a printer, and don't mind having them on paper, this is the most straightforward way to go about it.

2. Copy and paste the text portions into a text editor. This will be a bit time-consuming, but most people understand how to copy/paste, so no new skills are required. You will no longer have the formatting, but you will have all of the text.

3. Take screenshots (or screengrabs) of the conversation, page-by-page. You'll do this most successfully from a computer (as opposed to mobile device). Zoom out to a smaller view in order to fit more info into the screenshot. This is manually time consuming, but preserves the look of the formatting. 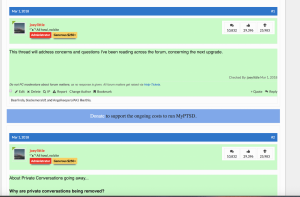 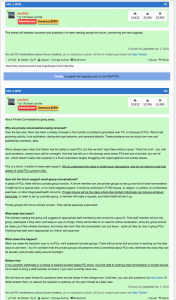 4. Re-scale each page of the convo (webpage) via the print menu, then save as a .pdf . To do this, have the convo open on your screen. If it's a multi-page convo, just start on page 1`. Use CTRL+P (or CMD+P) for the option to print the page. In the print menu you should have the option to select paper - select the largest size available to you. Then use the scale tool to re-scale the page; you'll need to go down to 10 or 20 percent, if the page is quite long. Finally, save the now-rescaled page as a pdf. When you open the pdf, zoom in on it to render the text readable again. You can then combine or merge all those pdfs into a single pdf.

Have another user-friendly idea that doesn't require special software? Feel free to message me about it, and I'll add it to this post.

Good Therapy Going Bad Because of Prior Bad Therapist

L
Relationship My ex with CPTSD blamed me for everything, and I am left feeling like I am nothing.
2 3 4