Friday said:
It’s nowhere near as bad as the first 2 days in making molé, but it’s still in the range of accidentally melting a bunch of plastic in the oven by forgetting to check it before preheating.
Click to expand...

Are you writing my life? Been researching “beginner’s mole” and last week learned how to clean plastic out of my oven

. Recently read about a 40-year-in-the-making mole, another one with over a hundred ingredients, and the winning dish of an international chef competition being mole—just mole. I am intrigued. I like the idea of fresh corn tortillas and mole as a meal.

Tonight I had “One Pot Garlic Pasta”. Never tried this technique of cooking pasta, but it worked! I also discovered that I prefer bite-sized pasta over long strands—I don’t like the task of cutting the pasta with my teeth because I accidentally bit my lip last time I had long spaghetti —I’m uncoordinated, or old, or not winding it on the fork? Anyway, used macaroni tonight and felt safe

Bunch of butter in a big pot (at least 2 T)
At least four cloves garlic (I like sliced)
Release the aromas
Add veggies if you like (I added sliced summer squash), cook til soft but not brown
Add 2 c broth (I used veggie, but roasted garlic would be yum—both Better Than Boullion flavors and vegan.)
Add 1 c milk
Season with salt and pepper (I added some red chili flakes)
Add 2 c (8 oz) pasta (I used macaroni)

Uncover and add at least 1/4 c cheese like Parmesan (I used grated Manchego, about 1/2 cup.
Add chopped green herb you like (I used basil, the recipe recommended parsley)

I added a teeny bit of the duxelles with cream and some nutritional yeast. This dish was delicious! I like how it was one pot, never done that before with pasta!

I have one of those, I call it poor mans Stroganoff.

Heat up a skillet with a couple tablespoons of oil. When its up to temp put the beef in and begin browning it and season with salt or celery salt maybe a little kitchen bouquet. Also how far you go with browning the beef affects texture and flavor.

While you are near the stove throw on a pot and water for the noodles.

Chop up the veggies. I go for about 1/4" on the onion and celery cut to 1/8" and rough chopped. Maybe throw a little onion in with the beef.

Put the veggies in the cooking bowl and open the soup cans and pour them in too. Add the George Washington Seasoning. Give it a mix, its way easier at this point to get the seasoning distributed evenly.

Your water should be boiling so go ahead and throw he noodles in. Cook al dente and throw them in your bowl.

Same with the beef when its ready, throw it in.

Add about three quarters of the sour cream if micro waving, half if oven cooking and none if freezing and mix everything.

You can cook it in the oven or microwave. I microwave for 20 min on high. About 30 min at 350 if you use the oven. If you cook it in the oven reserve more sour cream before mixing and spread it on top to keep the noodles from getting tough. If cooking in the microwave, put a dollop on before serving.

I like that I can make a batch and have a few meals. If you freeze it the sour cream looses it flavor so mix it in when you warm it up.

OliveJewel said:
Are you writing my life? Been researching “beginner’s mole” and last week learned how to clean plastic out of my oven

. Recently read about a 40-year-in-the-making mole, another one with over a hundred ingredients, and the winning dish of an international chef competition being mole—just mole. I am intrigued. I like the idea of fresh corn tortillas and mole as a meal.
Click to expand...

Yeah the recipe I “use” I refuse to make unless I’ve
a) Lost a bet
b) Am in possession of a gas mask, with the correct filter canisters ((IE suitable for caustic oils like mustard gas)).

The cheat version I make infinitely more often (several times a year, instead of once every several years) is basically just salsa ranchera + chicken stock / bone broth + chocolate chips. Plus anything else I happen to be in the mood for. Including wacky shit like crumbled goat cheese and bacon along with salsa fresco & cilantro over the top (queso fresco? Delish. In my fridge often? Pfft.)
Need help using the site? Contact Us.

Somehow I made a pot of soup for 10 tonight….there is only me….I can freeze some, but the veggies lose their crunch. It is sitting on the balcony cooling off before I put it in the fridge.

Heat 2 1/2 cups of milk, season with salt and pepper. Just before boiling add 2 cups macaroni. Stir constantly and simmer for about 10 minutes, until most of the milk is absorbed. Turn to low. Add a cup of shredded cheese and stir until mixed. That’s it!

Having Friday’s shrimp po boy sandwiches. This recipe is gold! Ate them on a telera roll with mayonnaise and sliced pickled spicy onions and carrots. Will add cilantro next time. Now I understand the “grabby” stage!


Friday said:
any seasonings (I use Old Bay) whilst still hot/wet/grabby
Click to expand...

Moderator
It’s snowing, so I should be making truffles (because the whole of everything just turned into a giant walk-in freezer, I could make 25kg of truffles in less than a day with that much space to work in; as opposed to indoors, and Tetris’ing a few cookie sheets at a time in the lectric freezer)… maybe some crusty bread and soup.

But instead? I’ve hit up Aus, and their summery, herbaceous, light & lovely recipes flooding the interwebz instead.

I haven’t quite decided, but so far the contenders are:

Bacon, Basil, Spinach Cobb dip
Something Zucchini Slice
Shrimp, shrimp, shrimp, shrimp… BBQ with a creamy/herby sauce, or prawn/peach/rocket/mint salad, or Italian seared shrimp with fresh tomatoes & pesto on toast, or, or, or
Need help using the site? Contact Us.

I made garlic knots and marinara sauce for lunch. They are so cute and pretty! I love each one

. Such a simple meal, but I feel like a Queen eating it.

Mix until shaggy then knead for about 7-10 minutes until dough is springy. Coat a bowl with 1 t olive oil and let dough rise in it, covered, until doubled in size (at least an hour).

The topping for the garlic knots:
3 T olive oil (recipe says butter but I was out so… cool, vegan!)
4 cloves garlic minced
Some chili flakes if you like
Chopped parsley if you have it
Let these marinate while dough is rising.

The marinara I made:
One onion, minced/diced, cook in a pan with a couple tablespoons of olive oil until carmelized
Add four cloves minced garlic
Dried herbs (I used oregano and Italian seasoning
Chili flakes if you like
Add your tomato product (recipe says can each of tomato sauce and tomato paste, but all I had was food bank canned spaghetti sauce)
Simmer.
I added chopped fresh basil, and some of the leftover garlic oil after brushing the knots. Salt to taste.

To bake the knots:
After dough is risen, divide into 9 equal parts. Roll into snakes and tie in knots. Bake in a preheated 350 oven for about ten minutes. Brush with the garlic oil (sprinkle with chunky salt if you like) then bake for at least another five minutes or until starting to tan.

Moderator
I am soooooo freaking in love with this stuff!!! Am extra good thing, as my definition of cooking at the moment, is “melting cheese on stuff”.
Need help using the site? Contact Us. 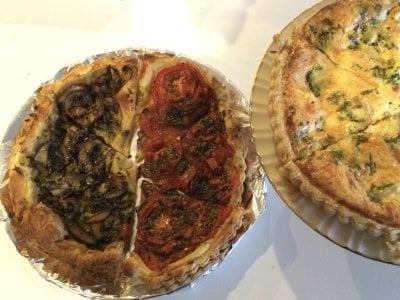 Roll out puff pastry, drape over tart pan, smoosh the sides into the edges, & “cut” off excess by pressing down over the edge top.

- Ring/brush the bottom of the pastry with olive oil.
- Layer sliced mushrooms (or tomato & basil leaves)
- Thin drizzle of olive oil over the top
- Generously pepper
- Bake at 400F 200C until it stops looking so wet/juicy & pastry is all golden brown & attempting to puff up in the middle (failing, but still attempting). 20min was nearly there 22 was perfect.

Bonus : Fresh herbs over the top

Not bad for “I have 1 tomato & 5 mushrooms & WTF am I going to make?!? Huh. I have another couple sheets of puff pastry in the freezer, don’t I? Yep!”

I personally like the tomatoes thinner on the ground, more like a Margherita pizza, esp as the crust is crisp enough to pick up and eat like a pizza, but flakey enough to easily use a fork. But as I’d already sliced up the tomato? Figured I’d use all of it.
Need help using the site? Contact Us.

We are having bacon, bread, and pickles for dinner