Sideways said:
What!?:geek:
Please try & remember to post pics of homegrown rainbow radishes when they happen, because that may just be the coolest vegetable ever!
Click to expand...

Sorry, above is reply @Sideways.

I love those rainbow colored ones. ? They make a dish pop, for sure! The local farmer we have a CSA share with plants some like that. He also plants a small white salad turnip of some variety that it all kinds of yum, too.

I discovered and planted (albeit a little late) an heirloom carrot seed that looks like golf-sized carrot balls. lol I saw today that they're finally peeking up through the dirt and I'm so excited to see the end results. Tonda-di-Parigi-Carrot-Seeds from Botanical Interests is where I got them.

Cheers to bountiful healthy harvests, both in the ground, in our heads, and in all the hearts. ? May we always remember that sometimes those darn weeds can do more good than harm. (I say as I still smell the scent of roasted dandelion roots in the air....lol) Grateful for this thread.

Dates and cashews, minced up in a food processor in equal portions as fine as you can get em.

Add a bit of cacaco powder, then a couple of teaspoons of water to make it a little muddy.

Roll that up into pint-sized balls of OMG-goodness with some desiccated coconut to make them spesh.

4 ingredients.
No oven.
Tasty as;)

Moderator
LOL @Sideways ... some the best treats are just that simple.

Exactly like the jelly filled truffles I used to love... Same flavor, same texture / bounce in the mouth...just a bit deconstructed. And, ya know, good for you! :roflmao:
Need help using the site? Contact Us.

Sideways said:
4 ingredients.
No oven.
Tasty as;)
Click to expand...

Sponsor
Mucus buildup from too many beans/lentils with not enough veges (esp leafy greens) balancing them out...!

Anyone know any good resources about this? I read an article in a bad headspace, and didn't take in the content properly beyond "ooh, that sounds like something nasty I'm setting myself up for" and now I don't know what I'm looking for?
(Currently have unhealthy obsession with baked beans for lunch, which I think I should be eating with salad? Because I usually have some form of lentils at dinner as well...)
M

Sideways said:
Mucus buildup from too many beans/lentils with not enough veges (esp leafy greens) balancing them out...!

Anyone know any good resources about this? I read an article in a bad headspace, and didn't take in the content properly beyond "ooh, that sounds like something nasty I'm setting myself up for" and now I don't know what I'm looking for?
(Currently have unhealthy obsession with baked beans for lunch, which I think I should be eating with salad? Because I usually have some form of lentils at dinner as well...)
Click to expand...

I always "upgrade" my beans. A bit of garlic, onion, or shallots, a pinch of dried basil, mixed herbs or oregano and some chopped up capsicum or mushroom (or both), maybe extra tomato in the form of puree or paste. Yummy.

If you soak lentils (actually all pulses) first, they change to a more vegetable less starchy chemical constitution and they are much more digestible. I know that.

Indians are great at the science of adding spices to pulses to make them super digestible. I know fenugreek, which is used in a lot of Indian pulse curries, helps eliminate or break down mucus.

I read a book shared with me by a friend who already practiced a whole food plant based vegan lifestyle that helped me tremendously when I first started my vegan journey right after my ER visit. Professor Arnold Ehret's Mucusless Diet Healing System - Annotated, Revised, and Edited by Prof. Spira. It was initially written in the 30s or 40s and this guy brought it more up to date with out current food supply and such.

I thought it was bat shit crazy at first, after having lived the Southern food meat/dairy/egg/sugar/salt/caffeine/"convenient" lifestyle for decades, but practicing what they suggested helped me a lot. Enemas are a part of it, which totally turn some folks off from wanting to read anymore, but I benefited from the knowledge they shared even if I didn't practice it hardcore.

It was the first book I read once I chose to drastically change my habits. I also read the Spira Speaks book that has essays and dialogues from folks who were actively practicing it and receiving one-on-one guidance, and that helped even more. He has a lot of you tube vids, too.

Ever since reading them, I make it a point to eat a salad of some sort with many greens/microgreens/sprouts with the more mucus forming foods to work as sort of an intestinal broom, so to speak. I definitely notice a difference if I don't. 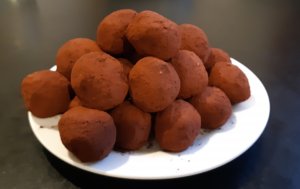 Blitz everything in a food processor.
Put a little extra cocoa powder into a small bowl.
Roll 5 small balls of the mixture at a time and drop into the cocoa powder, then shake the bowl around so they coat themselves.
Transfer to a plate.
Repeat with the remaining mixture.
Then put the plate with them all on into the freezer for an hour so they firm up.

Made 27 balls + several instances of eating the mix from the food processor bowl (it tastes like chocolate cookie dough).

6 ingredients is a big tick! I may try that with the dates I have - I think we have all those ingredients already ?
B

Love the look of those power balls @bellbird - I’ve made a few but haven’t ever got them quite right so will try your recipe next time. Are the measurements in cups?

barefoot said:
Are the measurements in cups?
Click to expand...

I forgot to add in that I soaked my dates and cashews beforehand; dates in warm water just for a few minutes, cashews in cold water for a couple hours.

Some people say soaking nuts increases their digestability. I don't know how legitimate that is, but either way it made them really easy to blitz :)
Last edited: Jul 11, 2020

L
ED Trauma, diagnosed borderline and have OCD and anorexia plus others..help

Undiagnosed 28, on the path of being diagnosed, neglected childhood, sexual assault and domestic violence

Dec 1, 2020
Kittie
K
R
Sufferer Coming to terms with what happened to me (sexual assault/rape)

Excruciating psychological pain daily, but not all day?